Within minutes, thousands of Twitter users had turned this into a viral storm, chastising Paddy Power for their blatant disregard of the precious Amazon forest.

A day later and Paddy Power tweeted another picture from it’s branded Twitter account explaining that the image was a manipulation, and even posted subsequent pictures explaining how they had created the image… 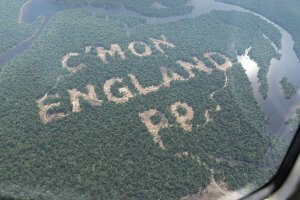 While the stunt has caused outrage on social media, Paddy Power has stated that their heart was in the right place and they came up with the stunt to highlight important concerns over deforestation in the Amazon. A spokesperson from Paddy Power said,‘We knew we’d drop off a fair few Christmas card lists yesterday, but we couldn’t resist a bit of fake Twitter mischief to highlight an important issue to football fans as our World Cup warm-up.’

What do you think? Was it a good move from Paddy Power, or was it a step too far? Let us know on Twitter or Facebook.